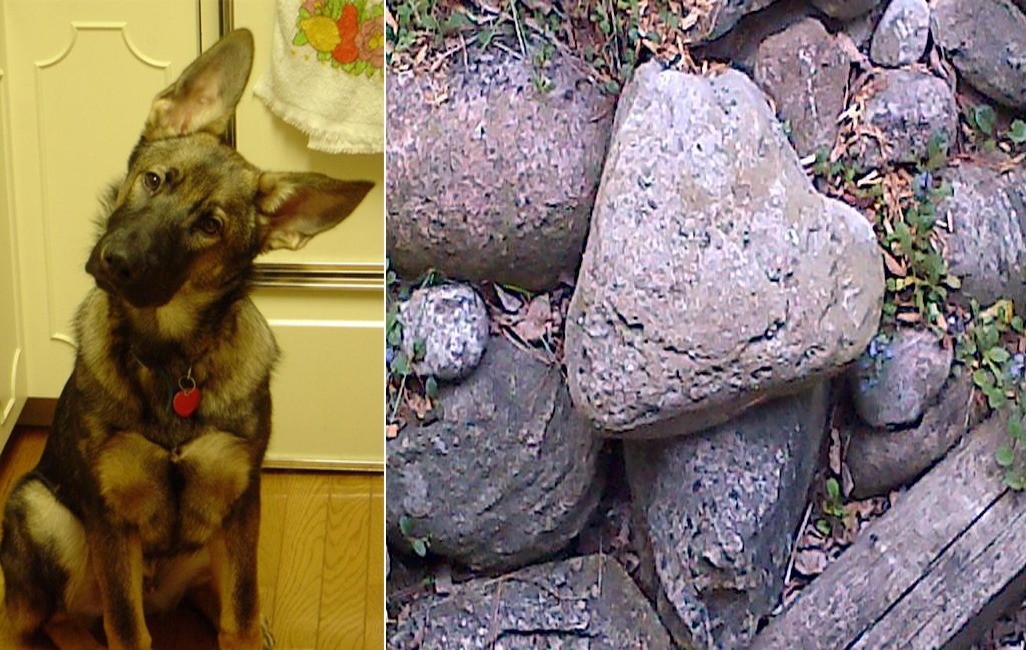 We personally believe that the events described in this Tale are messages from the “other side” directly from DUKE or THE 448 Angels, who we believe have assisted our Beloved Angel!

You Be… The Judge!

What you’re looking at in the pictures above is one of DUKE and the Rocks that shall allow us to remember Duke at least at my home in Belfountain, Ontario. Note how the shape of the top rock is shaped much like Dukes cocked head or as some say a Heart!

The Rock that started this tale of inspiration and confirmation!

What some perceive as gone forever… is really still so close!

NOTHING IN ALL EXISTENCE CAN PERISH… IT CAN ONLY CHANGE & EVOLVE!

On Friday May 25th after Duke was laid to rest at approximately 1:45 pm and while having a commemorative drink in honor of Duke with Erica on the outdoor deck of the Busholme Inn in Erin, Ontario, I received a call. It was from Anna Chiara who works in the London Office of Motovan the company I represent.

Anna was concerned how Duke was doing. I then proceeded to give her the sad news.

After Anna gave her condolences and before she hung up, Anna gave us a message with a few final words of consolation that to be quite honest with you… left Erica & I quite puzzled…

MAY A DRAGONFLY PASS YOU BY!

We didn’t know at the time what this expression meant… BUT WE DO NOW!

This is the Story…

The very next morning after Dukes passing on Saturday May 26th, after a very difficult night of grieving, I went out to sit by Duke’s Memorial. It was there that I watched a caterpillar rise up from the base of the Memorial Tree and make its way towards me at a rather rapid pace.

My mind at the time seemed to take this as a sign as a rising up from the ashes as I thought how this little creature will turn into a beautiful butterfly. If my intuition had been more correct I should have thought Dragonfly as you’ll soon see why. I could only imagine that Duke had gone through this same symbolic process only just yesterday!

As the Caterpillar reached my feet it seemed to disappear and as hard as I looked I couldn’t find it anywhere in the area. How odd I thought.

I returned to the house and took up my seat in front of the computer and began the epic 448 Story that you’ll soon receive describing the amazing events of Dukes final days. Approximately an hour into this work, I searched for the correct words to print when I was shocked by a distinct bite to my neck! With catlike quickness I swatted my hand across my neck and what should land next to the computer but a Caterpillar. It was virtually unharmed.

I scooped the Caterpillar into my hand and then got up from my chair and made my way to deck outdoors with the plan of putting the poor creature in the garden and that’s just what I did.

However I was slightly distraught that it didn’t land on the comforting ground of the cedar mulch, but instead directly onto the rock mentioned and seen pictured above.

It was at that exact moment that a Dragonfly appeared and swooped over my furry Caterpillar friend and as quickly as the Dragonfly appeared it immediately disappeared. My eyes scanned the garden quickly but it was not to be seen. How odd I thought again!

Just as Anna had wished for, The Dragonfly had indeed ‘passed me by’… but were it not for the nip from the Caterpillar on my neck and my choice to preserve its life. Would have never seen it!
I continued with my writing, but first had texted Erica, suggesting she consider making some type of Duke Memorial at her home in Listowel. It wasn’t more than an hour later and Erica texted me back that she had already been to the ZEHRS Garden Centre, with intentions of looking for some plants for her gardens, and possibly a flower to represent Duke. Well as “LUCK” would have it, Erica would be shocked to her core, as she laid her eyes on the first flower she sees, a beautiful Yellow Dahlia Flower and what should be on it but a…

Nothing Happens by Chance, Luck, or Coincidence!

Erica texted… “This Flower is as Bright and Cheery as him!”

DUKE… did indeed have a wonderful smile, and now both of us had a Dragonfly Pass US By!

The next experience was enough to make the hair on the back of your neck stand on end!

On Monday May 28th, 2012 as I left my home for work at Royal Distributing, I walked out my downstairs door entering the carport and this is what immediately occurred.

A DRAGONFLY FLEW RIGHT UP TO WITHIN INCHES OF MY FACE!

When I think back on it now, it was as similar as how DUKE reacted when he would re-unite with me or Erica when we would do our periodic transfers of DUKE. It was almost like frantic excitement… the Dragonfly was relentless circling me time and time again! I thought how odd this was and realized this was not going to be just a fleeting glance of this beautiful creature. This Dragonfly wanted my attention and it had succeeded! As I reached for my BlackBerry I thought… “I’ve got to try to record this” and my friends I can tell you with a totally straight face the Dragonfly wanted this picture to be taken as well. It made every attempt possible to come within the range of my BlackBerry camera. I began clicking away as I tried to capture my delicately winged friend. Remarkably a total of 36 photos later and an elapsed time of an amazing 5 minutes and 36 seconds the Dragonfly darted about my space. All I could think throughout this experience was…

IS THIS YOU DUKE? IS THIS REALLY YOU?

Was this what Anna meant when she asked for a Dragonfly to pass you by? Since talking to Anna now I realize it was! As her comments came from a 2002 movie called Dragonfly starring the actor Kevin Costner which was based on the theme of Reincarnation.

It was an absolutely amazing experience and when it all finally ended the enthusiastic and tenacious Dragonfly disappeared!

I immediately felt compelled to go to DUKES MEMORIAL and I walked directly to the tree with the intention of doing what I’ve done every day since Duke passed over.

I would KISS his name tag right on the words DUKE!

Within seconds I was at the Memorial but DUKE’S name tag was facing inwards towards the Tree and as I reach for the TAG to bring it to my lips, I was shocked to see what the words DUKE were facing… a little Caterpillar who was hiding behind the tag!

I began to gently weep but they were without doubt, tears of joy!

I truly felt that Duke had been there and had conveyed his message for ALL that he was… DOING JUST FINE!!!

WE LOVE YOU DUKE XOXOXO!!!

On this page I offer the photographic evidence of this True Story. To anyone who has ever lost or ever will lose a loved one in the future, I Now Offer To Pay This Wish Forward…

MAY A DRAGON FLY PASS YOU BY!

May I emphasize again… 36 photos were taken and the event lasted for 5.36 minutes.
DUKE’S MEMORIAL IN BELFOUNTAIN, ONTARIO.

The whole family grieves for you DUKE and so do your many friends that span a wide swath! The cats Terra & Cosmo especially, who’ve spent many hours together in your favorite spot on the sofa.

Well after this amazing series of events I began my travels to Guelph in my 448 JEEP (that’s another story) and I began a series of e-mails attaching a few of the key pictures above to my girlfriend Anne. As the final e-mail was sent I then took the picture below of my main Odometer and thought to myself….

“Nothing Happens by Chance, Luck or Coincidence”

Our Spiritual Teacher Dr. George King had a female GERMAN SHEPHERD named Chrissie as well! I wouldn’t doubt at all that DUKE and CHRISSIE may be playing together now in the Other Realms!

WITHOUT A DOUBT, IF EVER I SEE A DRAGONFLY… I’M GOING TO HAVE TO SAY…

Once, in a little pond, in the muddy water under the lily pads, there lived a little water beetle in a community of water beetles. They lived a simple and comfortable life in the pond with few disturbances and interruptions.

Once in a while, sadness would come to the community when one of their fellow beetles would climb the stem of a lily pad and would never be seen again. They knew when this happened; their friend was dead, gone forever.

Then, one day, one little water beetle felt an irresistible urge to climb up that stem. However, he was determined that he would not leave forever. He would come back and tell his friends what he had found at the top.

When he reached the top and climbed out of the water onto the surface of the lily pad, he was so tired, and the sun felt so warm, that he decided he must take a nap. As he slept, his body changed and when he woke up, he had turned into a beautiful blue-tailed dragonfly with broad wings and a slender body designed for flying.

So, fly he did! And, as he soared he saw the beauty of a whole new world and a far superior way of life to what he had never known existed.

Then he remembered his beetle friends and how they were thinking by now he was dead. He wanted to go back to tell them, and explain to them that he was now more alive than he had ever been before. His life had been fulfilled rather than ended.

But, his new body would not go down into the water. He could not get back to tell his friends the good news. Then he understood that their time would come, when they, too, would know what he now knew. So, he raised his wings and flew off into his joyous new life!